Edgar Jimenez, aka El Chino, was a puny classmate of Pablo Escobar’s at Antioqueño junior high school in Colombia back in the 60s. While Escobar used the ensuing years to become his generation’s greatest murderous narco superstar, El Chino slunk off to a dull life as a local wedding photographer.

But after a chance reunion in the early 80s, Escobar recruited El Chino to become his personal picture taker, documenting his political campaigns, his private parties, and the various goings-on at Escobar’s outlandish 4,500-acre estate, Hacienda Nápoles. El Chino spent the next decade in Escobar’s employ, enjoying total access and fussing over which of the drug lord’s associates was open to having his picture taken. This continued until the CIA, Los Pepes, Delta Force, Search Bloc, and a bunch of other people who wanted Escobar’s head on a platter converged to dismantle the Medellín Cartel.

Recently Jimenez invited Vice out to his home in the Aranjuez neighborhood of Medellín, where he let us rifle through his archives. These are our favorites. 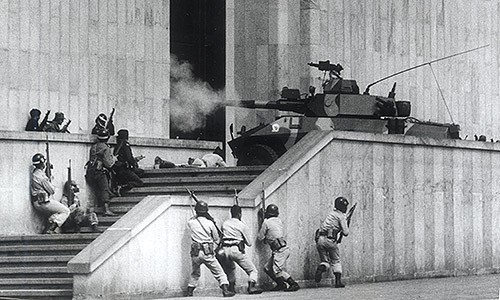